How can we help you today?

This is usually configured to a main phone line (company business line) and then sitting behind this main number are physical extensions (additional lines so that you can transfer calls, off those lines).

As the business grows and the call capacity increases then there are a number of options available:

The cheapest option is for us to:

1. Add in another Gigaset Base Station to your existing Base Station so you are running more than one base plugged into your router(s).

2. However please always be mindful that it still means that if you transfer a call it would take up 2 phone lines in capacity.

So if 2 calls came in and were transferred and you had 2 x N510 Base Stations (that allowed 4 consecutive lines in per base) this would take up 4 lines and then just leaves 4 incoming calls available, not 6 at that given time.

So it will still have its limitations.  Obviously the call capacity would be less if you were using the Gigaset N300 IP Base Stations (where you have just 3 consecutive calls coming in).

The more expensive option would be to upgrade to the Medium Business VoIP capacity set up now the business is growing.

Depending on your budget if you anticipate that your business is going to start growing rapidly in the near future it may be more advisable to upgrade to a more powerful system so that you will not have limited capacity as described in the small business VoIP set up above. 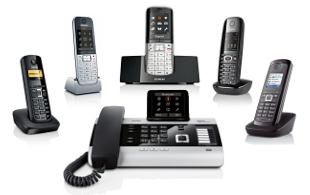 If you wish to find out more about this then let us know and we can cost this out against your specific custom brief and requirements please contact our Support Desk.

Did you find it helpful? Yes No

Send feedback
Sorry we couldn't be helpful. Help us improve this article with your feedback.